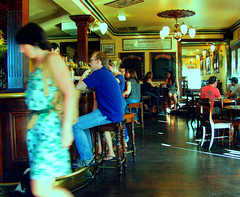 Many Americans moving to London are a bit baffled by the change in terms and names for things you’ve grown accustomed to in your homeland. Perfect examples are pavement to sidewalk, chips to fries and petrol to gas. It’s the kind of thing that could more than likely save you some confusion in day to day life here in London city. Asking for jelly on your sandwich may very result in you getting a large blob of wobbliness quivering between two slices of bread. Ask for jam instead.

Also, don’t worry that you’re being slightly un-PC should you ask for a dummy; that’s what they call a pacifier in these parts. Likewise, asking for a banger won’t result in a large man walking up to your table pounding his fist into his palm threateningly. Bangers are to England as sausages are to America. It’s one half of that famous national dish, bangers and mash (that’s Mashed Potatoes)

Heading to the Emirates Stadium or Stamford Bridge to take in a match? Then whatever you do, don’t call it soccer. It might make you grate your teeth if you’re a devoted NFL fan, but in England, twenty two guys gathered on a field to kick a ball around is officially known as Football. Calling it soccer could risk some rude comments from the ‘footie’ fans.

To become a true Londoner, try using the more particularly English terms, the slang if you will. If anything, learn these terms largely because of the pleasure you’ll take when you see the surprise on your English friends’ faces when they hear you throwing around the local slang.

Here then, for your edification:

It’s not a telephone, it’s called the blower.

Underwear? “Alan Whickers”, Cockney rhyming slang for knickers. Often shortened to Alans. As in, “Keep your Alan’s on!”, the English equivalent of “Don’t lose your shorts.”

Another bit of Cockney rhyming slang is Ayrton. As in Ayrton Senna. He was a world famous Formula 1 racing driver. It rhymes with tenna for Ten pounds.

Bollocks, which essentially applies to anything which can be called rubbish, drivel or nonsense. Used effectively and in the proper situation this should go some way to showing off the burgeoning Anglophile that you are. Not to be confused with ‘dogs bollocks’ though which applies to anything cool and inarguably awesome!

There you have it. There’s lots more than that, but living in London and spending enough time with the locals, you’ll be throwing around London talk with the best of them in no time.