Living in London – “Should Auld Acquaintance Be Forgot…” 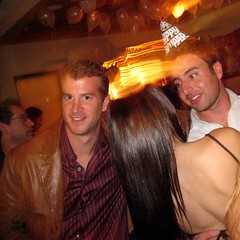 If you have had enough of turkey, gammon and Christmas pudding, then you are like me and your sights are firmly set on 2011 and the New Year. If you have just recently made your move, then you will probably have spent most of the festive season celebrating indoors and getting settled into your London apartment. It might time to start planning what you will be doing to celebrate the New Year, London style. New Year’s Eve celebrations are huge and if you have recently finished your relocation to London then you are in for a treat when it comes time to welcome the New Year and you new life in London.

Auld Lang Syne
This song is not just sung in London and England, it is well known all over the world as being the song that most epitomises the ringing in of the new and the waving goodbye to the old. Auld Lang Syne means ‘the good old days’ and it has become the anthem of New Year’s Eve celebrations around the world. It is traditionally sung at midnight as the New Year arrives. The lyrics to the song were written by the famous poet Robert Burns and published after his death in 1796.

The tradition of ‘first-footing’ is still practised in England and many people take it quiet seriously. The first visitor to your house should be a male and you will have good luck throughout the year. The visitor must bring a piece of coal with them as they step over the thresh hold as this is considered an important gift. Giving a gift of money is also considered a traditional gift if you are the first male visitor. Typically, women are not supposed to step into a house first in the New Year as they bring bad luck, blonde women are said to be the very worst kind of luck ever!

One of the most colourful traditions if the New year’s day Parade which starts at noon on January 1 from Whitehall, via Pall Mall and ending up in Berkley Square. Performers, musicians and other entertainers throng the streets with revellers to provide a distinctly party atmosphere and a great way to celebrate the New Year.