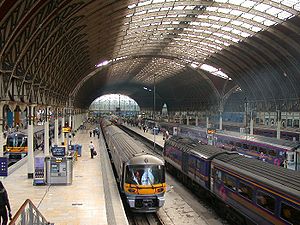 Living in London means that you’re surrounded by the history of a country that shaped the very face of this magnificent city. While our Saturday series ‘Weekend Away’, takes a slightly more humorous approach to the events in history that have had an impact on London and England, our Sunday Series, ‘People and Personalities’ looks at the people that have played an important part in making the United Kingdom what it is today. We’ll be taking a trip through history to examine the lives of extraordinary people who each made a contribution to Great Britain.

Brunel is considered one of the world’s greatest engineers and innovators. He, along with a handful of engineers and scientists are responsible for the entire Industrial revolution. He was the most prodigious engineer of his time and encouraged his colleagues and associates to strive for perfection, innovation and growth. Many of his inventions, structures and feats of engineering have existed until today and his contribution to Great Britain will be remembered in every train that trundles the length of England, and every ship that has set sail across the ocean.

Isambard Kingdom Brunel was born in 1806. He was the son of a French engineer, Sir Marc Brunel who had settled in England during the French Revolution. Contrary to many of the young engineers of the time, Brunel was given an extensive education, both in France and in England. He joined his father’s engineering firm on his return to England and immediately started working with his father on the design and planning of the first Thames Tunnel.

Brunel’s reputation continues until today for the work he did for the Great Western Railway. He was appointed as the head of engineering for the company in 1833 and he started work on the bridges, tunnels and viaducts which cross the length and breadth of Great Britain. His first feat of engineering for Great Western railway was the railway line that linked London to Bristol. It did not just involve laying down some track across the land. The line includes the Maidenhead Bridge, the Box Tunnel and the viaducts at Chippenham. Brunel was the first engineer to use a broad gauge line instead of the familiar single gauge railway line.

His design for the bridge that was to span the River Wye on the line from Swindon to South Wales included a suspension, tubular and truss bridge, which was to become the blueprint for the massive bridge over the Tamar River. Brunel was the designer and engineer of over 1200 miles of railway line which included laying of track in Italy and Ireland.

His work and genius was not only confined to railways. His bridge over the Avon Gorge: the Clifton Suspension Bridge was completed after his death as a memorial to one of the greatest pioneers and engineers of all time. Today the bridge still carries traffic across the gorge and is used by millions of vehicles every year. Brunel is the designer of Paddington Station in London as well as number of other stations on the Great western railway Line.

Perhaps though it is Brunel’s contribution to modern transport on the high seas that he will be most remembered for, in terms of opening up the Empire and establishing Great Britain as one of the most powerful nations in the world. His work for the Great Western Steamship Company was to increase the transport of goods and people across the Atlantic Ocean. Many people dismissed Brunel’s designs for the massive steam ships because they were felt to be uneconomic and not commercially viable. Brunel’s research led him to believe that a larger steam ship would actually use less fuel than a smaller one. So convinced he was of his theory and design that he offered his talents for free to the company.

The Great Western was the longest ship in the world when it was built and made its maiden voyage across the Atlantic in 1838, taking 15 days and arriving with a third of its fuel load of coal still untouched. Brunel’s theory was correct and the world started to take notice. Nothing would stop him in his search for faster, bigger ships that would be able to make their way around the world on steam alone. The Great Britain introduced the use of propellers to ensure speed, and The Great Eastern was the most ambitious ship that Brunel ever designed. Brunel designed docks and shipyards as well as other engineering innovations that led to the greatest economic revolution in the world.

Unfortunately Brunel suffered a stroke in 1859 just before the Great Eastern was to make her first crossing of the Atlantic Ocean. He died at home ten days later.