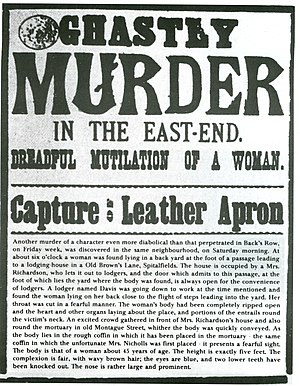 When you’re living in London you’ll see that much of the history has been made by the people and personalities who have lived in the city. The East End of London has developed a reputation and a history for being one of the more salubrious suburbs. Much of that reputation has to do with the colorful characters that lived in the East End.

The area’s reputation and history have been influenced by the media. When you see films about the life of Jack the Ripper, he is always luring innocent women to their deaths down fog filled alleyways and dirty London streets. Never mind that ALL of London was dirty and fog filled during this time; the East End is portrayed to be the dirtiest, and foggiest of all…perfect for murder and mayhem.

Ghostly goings on and laudanum filled London are the backdrop for one of the world’s most famous characters. The story of Jack the Ripper is one of the greatest unsolved crimes in history, or was it solved and covered up? Who knows…?

Jack the Ripper was the name given to a serial killer who used to stalk the streets of the east End of London and in particular, the Whitechapel neighborhood. The brutal murders started in 1888 and continued until 1891. Eleven bodies of prostitutes were found during this time and the police investigation was named the Whitechapel Murders. The police docket gives a fascinating insight into the methods of investigation used by Scotland Yard during the Victorian era. Although the Ripper was never caught, the police left no stone unturned in the hunt for this vicious killer.

Who was the Ripper?

It was established beyond a doubt that the murders were committed by the same hand. Despite the rumor that the Ripper was in fact a doctor or had extensive medical knowledge, Bond stated that his opinion was that he did not. The man was said to be solitary and given over to episodes of homicidal and erotic mania. Many of the victims were killed on weekends, which gives rise to the theory that the Ripper was employed and lived in the area. Or was he an aristocrat who was slumming it in the east End to get his kicks? Or was he in fact a surgeon? Or a member of the Royal family as has been suggested?

The suspect list is still open and to this day there are still over 100 people on the list, including some rather famous people. The identity of the Ripper will never be known, but with hundreds of films, books and television series devoted to the man and his crime, he is one of the most infamous Britons ever.

Madame Tussauds, the famous waxwork museum does not have a figure of Jack the Ripper in their Chamber of Horrors because they can only work from a human likeness. He is portrayed in the museum as a shadow, and indeed this shadowy specter has done much to influence and affect the history of the East End of London