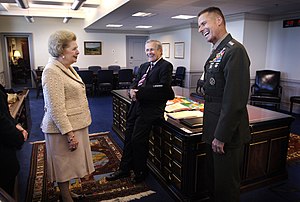 While you are living in London, you’ll find out that much of the history of England is based on people and personalities. It is the people throughout the history of this country that have made Britain Great. Now that you are living in London, you will have the opportunity to explore the city, with the knowledge that it was built and developed by people, not institutions or companies, but ordinary people who lived extraordinary lives in service to their country.

One of the most influential people and personalities in the history of England has to be Margaret Thatcher. She was the first woman to lead a political party in England and the first woman to serve as Prime Minister of the United Kingdom, from 1979 – 1990.

Baroness Thatcher, as she is now known did not start life as a member of the aristocracy. She was born in Grantham, the daughter of Alfred Roberts, who owned two grocery stores in the town. Young Margaret won a scholarship to a private school and from there read Chemistry at Somerville College, Oxford. It was at university that Margaret became the President of the Oxford University Conservative Association which was the start of her great political career.

Married to Dennis Thatcher who financed her studies to become a barrister and supported her throughout her rise through the ranks of the Conservative Party and through her terms as Prime Minister, she has two children, Mark and Carol. After her husband’s death in 2003 she paid homage to him in her book “the Downing Street Years” saying, “Being Prime Minister is a lonely job. In a sense, it ought to be: you cannot lead from the crowd. But with Dennis there, I was never alone. What a man. What a husband. What a father.”

As Prime Minister, Margaret Thatcher was both reviled and praised for her unbending approach to the labor unions, as well as to the ending of the cold war and communism in the Soviet Union. Her defining moment came when Argentina invaded the Falkland Islands. It was a period where Thatcher rallied the entire nation into patriotism and nationalism, where for the past twenty years the country had been segregated and divided on many issues.

Thatcher dominated the world stage in politics during the years that she was in power and her influence continues to this day. She forged important relationships with the President of the United States, Ronald Reagan, which was based on the mutual desire to see the end of communism in the world. The Soviet Union nicknamed Margaret Thatcher, “the Iron Lady” and has lived up to her reputation across all fields of her political influence. Margaret Thatcher narrowly escaped death in 1984 after a bomb was planted at the Conservative Party Conference by the IRA.

She left the House of Commons, which is the home of Parliament and Government in London after a leadership challenge and internal party discontent. She is a member of the House of Lords as the Baroness Thatcher of Kesteven.