Living In London – Number 10 vs. The White House 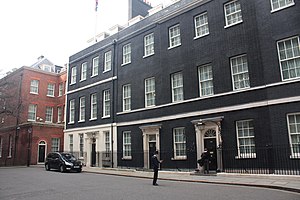 If you’re living in London, then you’re also living at the heart of British politics and the seat of the government. While many people consider the Houses of Parliament and Buildings at Westminster to be the headquarters of the government in England, there is another address that is just as important and is well worth a sightseeing visit if you are moving to London.

Number 10 Downing Street is the home of the Prime Minister, much like The White House is the home of the President of America. The scale and size though is remarkably different. While you cannot take a tour of the interior of this most fabled and famed seat of power in the history of the world. You can take a fascinating online peak of what happens behind the unremarkable black door that leads straight onto Downing Street.

Not only is it the home to the Prime Minister of the day, it is also the very heart and inner sanctum of the government of the day. While they are in office, the Prime minister and his family live in a private London apartment on the second floor of the residence which led Margaret Thatcher to comment that it was a little like “Living above the shop”. The cabinet meets every Tuesday to discuss affairs of state in the Cabinet Room. Number 10 is able to handle functions of up to 65 people in the State Dining Room, and an invitation to dine at Number 10 is highly sought after.

Due to the heightened security of recent years, it is not possible to walk up to the door, but in a typical display of restraint and tact there are usually only two bobbies, or policemen on duty outside of the door to Number 10. There are more though, you just won’t ever be able to see them.

One would have expected that the leader of one of the world’s greatest nations would have something bigger, grander and more fitting, but one of the first things you’ll learn when you’re living in London is that tradition is one of the binding facets of English life.