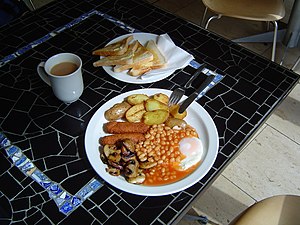 There are quite a few things that your London relocation agents should be able to help you with, chief of which is finding a decent area and house to suit your needs. Most good relocation companies will also be able to tell you about the nuances and quirks of the area you’re moving to, transport like the tube and taxis so you can get around as well as informing you of decent schools in the area should you have kids. It would be odd though to expect your agents to know about decent cooking, though you’re welcome to ask them. You never know. One of the fastest ways to get acclimatized to living in London is to learn about, and sample English meals and cuisine.

Let’s start with the most important meal of the day. Sometimes you’re satisfied with cornflakes for breakfast, and then at other times, you want to break the routine. Okay then: eggs, bacon, sausage, toast, tomatoes, baked beans, mushrooms, and potatoes. That’s what’s called a Full English Breakfast. The coffee is optional.

On to lunch then. Bangers and mash? It’s a very democratic sort of meal in that it’s open to being consumed at any time of the day. So why not give that other English standby a try: Fish and Chips. On a serious note, it’s recommended that this doesn’t become an everyday sort of thing and to maintain a healthy lifestyle, you really should pack in a meal to take with you to the office. This counts doubly if you have kids. You want to set a good example after all.

Sumptuous English Suppers. Let’s face it, you’re living in London, so the idea of the traditional English dinner (Roast Leg of Lamb, Gravy and Vegetables) might be something best left for Sundays. Many Londoners generally have something like pasta or even curries for dinner, so unless you want to go really traditional, leave the hardcore dinners for the weekends.

Once your London relocation agent’s job is done. It’s up to you now to start living like the English. Eating like one isn’t a very difficult place to start.