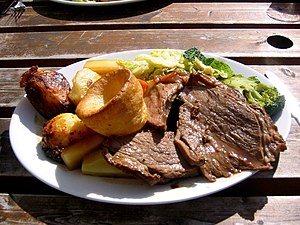 When you are living in London you will find that people are divided into two camps. Those that are slightly disparaging about the concept of British cuisine and those that are proud of their traditional English food. One of the major issues seems to be the idea that Britain has no national dish! Part of this is because London, in particular. Is a transient city and England itself has always welcomed immigrants and foreigners to their shores. This has created something of a cultural melting pot, and this has spread across into the culinary field as well. So as soon as you are settled into your new London rental, you should spend some time sampling what are considered to be traditional English meals and foods.

Don’t be fooled by thinking that British food is all about stodge and starch. A traditional English meal of Roast Beef and Yorkshire Pudding is surprisingly light. Thinly sliced rare roast beef served with a flour based dumpling and some vegetables is a traditional meal for Sunday lunch across much of Britain. Be aware that Yorkshire Pudding is not, in fact a dessert; it is a savory dumpling that is served with meat. It is not stodgy and when cooked to perfection, nothing is better.

If you are craving a fast food meal, then why not break away from the hamburger joints and sample the traditional British equivalent which is Fish and Chips. The fish is covered in a batter and then deep fried until golden brown and the chips are actually thick wedges of real potato that have been deep fried. Don’t worry about the fat content – it’s fast food, and a lot more healthy than most of the processed junk you’ll find at other places. The whole meal will be served with lashings of salt and vinegar and wrapped for you in news paper, another tradition of the fish and chip experience.

It might be an import, but has been the most popular meal for decades. The wealth of the Indian culture is a part of England and London today, and some people consider it to be a part of the national cuisine now. A curry from your local Indian restaurant is considered to be one of the most popular meals in England today.

There are a number of other dishes and meals that should be sampled once you are living in London. It can be fun learning about the national cuisine and the different traditions surrounding meals in Britain.