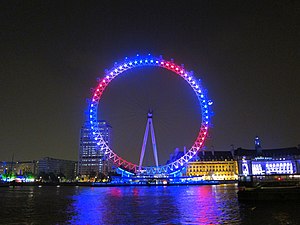 Most couples like to take one day out of the year (or two or three) to really splurge and show each other how important the other one truly is. After moving to England, couples are given a rare opportunity to pull out all the stops and create a simply remarkable date night experience like none other before.  This spring couples after moving to London, England can show their love and learn more about their new town by reserving a private capsule on the London Eye.

There are several romantic packages available at the London Eye, the city’s giant ferris wheel soaring one hundred and thirty five meters in the sky.  Most families moving to London, England can’t help but notice the giant wheel upon entering the city.  It was built in 2000 and is London’s fourth tallest structure.  It is so large that it takes thirty minutes for one entire revolution.  Since opening an average of 3.5 billion British citizens and tourists from around the world ride the London Eye each year.  That is no surprise considering once at the top one can see for twenty five miles in every direction.

The special package available this 2012 winter/early spring season is a private capsule for two with a personal host to detail the history of the London Eye as well as point out landmarks.  A bottle of champagne will be served as well as chocolates.  For those wanting to truly make it a night to remember dinner reservations at a nearby restaurant can be made or a London Eye river cruise with dinner can be added.

Moving to England, can be very stressful for couples between trying to arrange the move, find a home and begin new employment.  Taking the time to spend a night together not worrying about the budget, the kids, or missing the States is absolutely necessary.  There is perhaps no better time than early spring to take advantage of all the beautiful sites the city has to offer, the London Eye being just one, after moving to England.