Relocating to the UK: Moving to London-Sights: Modern Architecture in “The City of London” 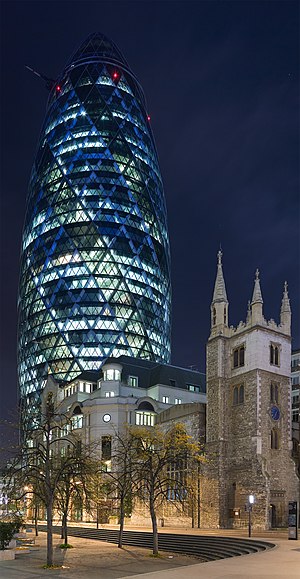 If you are relocating to the UK and moving here, you might be expecting a lot of history; this is after all one of the most historical cities in the world today. When you are done admiring the palaces, stately homes and examples of Georgian architecture, then you might want to spend some time admiring some of the modern buildings that this quirky city has to offer.

If you are in the middle of a London relocation and you keep hearing about ‘The Gherkin’, then do not be alarmed. Going down to the Gherkin is not a secret ritual that you have never heard about. The Gherkin is the Londoners name for one of the most modern and uniquely designed buildings in the world. It is also rather difficult to miss since it is in the shape of, well, a gherkin!

This building is one of the most modern buildings in the heart of the city as well as being in the heart of ‘The City’. This is another phrase that you might need to understand if you have recently relocated. No matter where you live, you can be sure that you will meet someone who works in ‘The City’, which can be confusing since everyone works and lives in the city of London. ‘The City’ is an area in the heart of London, which is made up of financial businesses and banks. This is the ‘Wall Street’ and it is here that the big stockbrokers and financial high flyers work. The boy’s, and sometimes girls from ‘The City’ tend to dress alike, work, play and live in a certain area and they are among the upwardly mobile set in London’s social scene.

The Gherkin is situated in ‘The City’ and it is officially called the ‘Swiss Re Building’ or is also commonly referred to by its street address: 30 St Mary Axe. Yes, London addresses are frequently confusing! The Gherkin is one of the most admired buildings in the world and has been featured in many films, since its opening in 2004. The building can be seen from over 25 kilometres away and it is well worth a visit, especially if you are going to sip cocktails in the Dome, which is at the very top of the building and offers a 360-degree view of the city. There is also a restaurant in the building, which can be hired for private functions.

The unique design features some of the most innovative ‘green’ solutions for heating, cooling and ventilation and it is well worth taking a tour of this phenomenal building. It is not all about old charm and quaint cobbled streets. It is a vibrant and cosmopolitan city that teems with modern buildings and a business district that deals in billions of pounds every day. Be warned, if you have a job in ‘The City’ you will have to dress the part!  It’s just part of the fun of moving here!