The London ‘Underground’ – The Hidden Treasure of London Part III 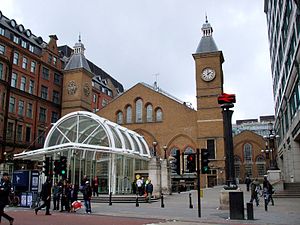 When you’re living in London, one of the defining characteristics of this fascinating city is the architecture and the buildings. History has had a way of imprinting itself in the city, and even after years of development and urban renewal, you can still find some magnificent and alternative buildings that are well worth a visit while you’re out and about in London.

Some of the buildings are mere monuments to the history of the city, while others have been pressed into use for different functions. They all have a history and more importantly, a story to tell…

The introduction of Turkish baths to England came at the height of the Victorian era. The Turkish bath is quite distinguishable from other types of baths by the use of dry hot air instead of steam or sauna. The popularity of Turkish baths was unsurpassed during the reign of Queen Vitoria, when it was considered an absolutely acceptable way of passing an hour or two in the company of like minded people. From over 600 Turkish baths down to a mere handful today, the building is a fine example of the architecture of the time as well as the splendor of a bygone era.

Built in about 1895, the ornate building was one of the most popular Turkish baths in London. Its ornate façade gives you a hint as to the type of buildings that were popular during this time. Today the ‘Old Turkish Baths – Ciro’s Pizza Pomodoro’ is a popular restaurant in the heart of the financial district in London. Is it a restaurant or a historical site? It seems out of place amid the glass skyscrapers and lunchtime suits that amble past, but as a historical attraction it is a fascinating place to visit and a quirky place to enjoy a pizza treat. Located on Bishopsgate Churchyard, the closet tube station is Liverpool Street

If you’re looking to experience a Turkish bath while you’re living here, and it is a rejuvenating and interesting experience, then there are only a couple still in operation. York Hall has single sex and mixed session for the baths, and the Ironmonger Row Baths in Islington offer a remarkably quirky way to spend an afternoon.