Living in London: Put Your Walking Shoes On!

By London Relocation | 03 May 2011 | London Neighborhoods 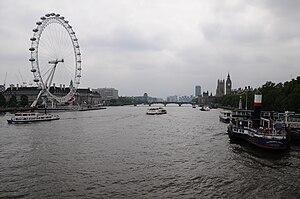 When you relocate to London, you’ll find there’s no end to discovering things to do, whether for yourself or visitors that you host. A major perq of moving to London is having much more opportunity to explore all its nooks and crannies, so you’ll receive guests who are excited to have their own personal, knowledgable tour guide. 🙂

As I mentioned Monday, this week I’m hosting a close friend of mine, so my posts will be based on our activities so you can get some ideas for city excursions and how you might conquer a lot in a little time if you tackle your London tours in clusters (in the spirit of my “London Bundles” series) and make the most of London’s public transport.

So yesterday, my friend was keen to check out the London Eye, which didn’t exist when we last toured London together in 1998. Catching the District Line to Westminster station gave opportunity to see Big Ben and Parliament up close (with Westminster Abbey looming not too far away) before we crossed the River Thames and boarded the Eye. New to me this time round (who hadn’t been on the Eye in two years) was a “4D Experience” you can have for just a few minutes prior to getting inside your Eye-Pod (hardy-har…my cleverness is infinite, isn’t it ;)).

A clear, sunny day, it was perfect for staying outside a while, so re-crossed Westminster Bridge and walked along the Embankment, where, just before the tube station, we cut up onto Craven Street to see the former homes of Herman Melville (author of Moby Dick) and Benjamin Franklin—Benjamin Franklin House, in fact, was effectively the first American Embassy in London, where Franklin lived for almost sixteen years just prior to returning to the US in time for its war of independence.

From there, Trafalgar Square was right around the corner and Buckingham Palace a stroll down the Mall. Pleasant to see the palace this time without the Royal Wedding masses crushing me, there were still apparently enough buffoons present to attempt climbing the palace fence—never in my entire experience living in London so far had I seen a royal guard pointing his firearm at civilians…well, yesterday changed that. “GET OFF THE FENCE!” was shouted by two guards, in fact, as they lowered their guns to their waists and aimed them directly at the tourists. Yowzah! Never fear, a bobby came to the rescue. And just so ya know, probably some of the nicest gift shops you could visit in London are located along Buckingham Palace Road—two of them located along the palace boundary and another just across the street from the Queen’s Gallery entrance.

In the interest of time (and our tootsies), rather than backtrack on foot, we just walked to the nearby Victoria station and caught the District Line to Temple station, which is just around the corner from The Strand, which, had we hung a left, could have led us into the theatre district, but we took it to the right, which led us toward Fleet Street. Just before the road changed its identity for the first of two times during that walk, we popped into the Twinings tea shop across from the Royal Courts of Justice. This narrow lil’ tea store was founded in the early 1700s and still has its Royal Wedding commemorative blend in stock, a special tea commissioned by the Queen. And then, just before Fleet Street turned into Ludgate Hill, we ducked into the little alley of Ye Olde Cheschire Cheese, favorite haunt of Charles Dickens and Samuel Johnson. There, we tucked ourselves into a cozy nook in the cellar bar, then tucked into a steak and ale meat pie and sticky toffee pudding, all washed down with a pint of Samuel Smith’s Organic Wheat.

My husband works near St. Paul’s Cathedral, so we lingered in the area until we could meet him for dinner. Enjoying the last of the sunshine sitting on Paul’s steps, I discovered that my friend is also a fan of the film Closer, rendering it imperative that I dash her off to Postman’s Park nearby to “meet” Alice Ayres at the setting of the movie’s critical scene. And while we were already so close by, I figured why not take her over to Smithfield Market, where I could show her the historic meat market along with St. Bartholemew’s Church (which has featured in many films and was the site of a printing press where Ben Franklin worked) and the site of William Wallace‘s execution.

Thoroughly pooped from all our on-foot London travels, we gladly sat to a high-carb dinner with the hubby at Zuccato City Italian restaurant on the darling Bow Lane, a cute area of narrow shop and pub-lined streets located just behind St. Paul’s.

Oh my goodness, I’m exhausted just writing about it all again, and we definitely felt wiped by the time we reached home, but it was an amazingly achievable feat that we did manage at our leisure, so it didn’t feel like we were on a mission. And we hadn’t even gotten going until noon! It’s just a testament to London and all it contains within walkable distances, getting you geared up to see and learn more as you round each corner. Relocating to London is like having your lifestyle chug a Red Bull in that way—totally optimizing your everyday with renewed zest just when you think you’ve seen it all. 🙂