Living in London – London Attractions In The Holidays 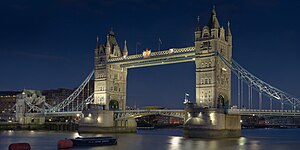 If you have managed to get settled into your new London apartment and been able to experience a traditional English Christmas after your move to London, then you might want to spend the next week exploring the city and everything that she has to offer, before you head off to the city to start work in the New Year. The end of the year is not a long holiday for the people of the United Kingdom, who prefer to take their main holidays in the summer months, much like the Americans.

If you do have a week or so at your disposal, then these are the top ten tourist destinations in London. Places that you simply ‘have to’ see, as part of living in London.

Can you imagine a more iconic British sight that Tower Bridge? Immortalised in hundreds of films across the decades and if you see a picture of Tower Bridge, you know you are in the heart of London. Towering Victorian Gothic architecture and incomparable design, Tower Bridge, designed by the architect Horace Jones in partnership with John Wolfe Barry was finished in 1894. Oddly enough, Tower Bridge takes its name from its location and not from the design. It is in close proximity to the Tower of London.

The design of the bridge had to be able to take the constraints of the huge shipping trade that made Britain a world power it had to be able to open up to allows all ships free passage up the River Thames. While it used to be opened and closed more than 50 times a day to allow all manner of ships up the Thames, today the bridge is only raised and lowered about one thousand times a year. The raising and lowering are a remarkable sight and the openings are pre-scheduled so that you can enjoy the pomp and ceremony of this iconic landmark. The mechanism that opens and closes the bridge is concealed in the two towers and until recently, it was operated by steam power that was used to pump water into the hydraulic system that powers the engines.

The proportions of Tower Bridge are astounding. While it is by no means the longest or highest bridge in the world, the design allows for the central span of two equal parts to be raised and lowered. Quite a feat of engineering considering when it was built! In total, Tower Bridge is 244 metres across the river. The two towers each have a height of 65 metres, which are firmly anchored into solid piers. Each section of the bridge can be raised to an angle of exactly 83 degrees to allow any type of ship to pass through. The sections are counter balanced to ensure that it can be completely raised within a period of 5 minutes.

You can also take a tour of the inside of the bridge with breathtaking views over London and up and down the river. However, no trip to London is complete unless you take home a photograph of this towering monument. The Tower Bridge Exhibition is housed in the covered walkway of the bridge and it includes the two famous towers where you will be able to take a trip into the history and engineering marvel of the Victorian engine room.