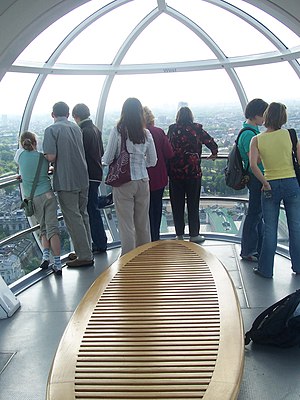 London is a city surrounded by landmarks that you may have read about in the media or even you history books. Living here means that you are living in a thousand year old city with a wealth of history and some of the most historical and interesting landmarks in the world. You’ll have the opportunity of seeing the official residence of the Queen and the Royal family – Buckingham Palace that boasts 600 rooms. The City of Westminster which is the location of most government offices and Parliament where the House of Lords and House of Commons conduct their sittings as well as the Tower of London which was built by William the Conqueror as a royal fortress and also houses the Crown Jewels.

London has a population of over 7 million residents, which make it the biggest city in Britain. It also boasts the Tube, which is an underground railway system. It is also the entertainment capital of the world with a large number of theatres.

Rome might have the biggest dome, with St Peter’s Basilica but we have the second biggest dome known as St Paul’s Cathedral, which has gone through its own difficulties since 604 AD and has never been destroyed even during the bombing in the Second World War.

Another popular landmark albeit a little distance from the city is Stonehenge, which was built 5000 years ago and is the topic and scene of mystery and wonder. Windsor Castle, which for 900 years has served as a royal residence, is situated near the famous river Thames. Another landmark that is great for a day trip out of the city is Blackpool Tower, which is mainly considered a tourist attraction, but if you are living here, you should pay a visit to what is considered the most famous seaside landmark in England.

London also boasts another modern landmark that is well worth a visit. The London Eye is the world’s biggest Ferris wheel and it carries 800 passengers on a thirty-minute journey giving you spectacular sights over London. It is an amazing landmark which will have you telling people back at home about it.

So, if you thought moving here would be just an ordinary change then knowing that these incredible landmarks surround you should make you realise that you are part of the local history.