Living in London – A ‘Green’ City Part I 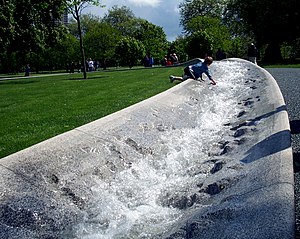 Living in London is like living in one of the world’s most beautiful gardens. At nearly every turn, there is a stretch of land that has been prepared for you to enjoy. Like any large city, space is at a premium and many homes do not have gardens or a place to sit outside and enjoy the clement weather when it arrives. Getting out of your new London apartment and enjoying the beauty of the green areas in London will be a treat as well as great exercise. Moving to London does not mean that you will be living in a tiny apartment in the heart of an unfriendly city. Moving to London will give you the opportunity of broadening your horizons and experiencing one of the most beautiful cities in the world. This article is the first in a series on the ‘green’ living experiences in London.

One of the most famous parks in the world. It has been immortalised on film numerous times and is one of the largest parks in London. Attracting millions of people each year, this is a park that has a number of tourist attractions in the area as well as being a great place to relax and enjoy the sunshine – yes, the sun does shine here!  As you approach the main entrance to this park, you will be struck by the sensation of being in the countryside immediately. London is one of the most treed cities in the world and Hyde Park has hundreds of shady spots where you can enjoy a picnic or just spend a few minutes of your lunch hour in the middle of the day to relax and recharge your business batteries. If you are an equestrian, then you’ll be thrilled to know that many of the parks have bridle paths and horse riding is extremely popular in this city.

Hyde Park is divided into two halves by the Serpentine River that winds lazily through the park. From April until October you can hire a rowboat and explore the river that flows through Kensington Gardens all the way to the Diana Fountain, which is a tribute to the late Princess Diana. There are plenty of eateries and restaurants along the Serpentine so you can work up an appetite and then enjoy a long lazy lunch in the sun, which may or may not turn into early evening cocktails.

One of the most eclectic sites in the park (and one of the most famous) is ‘Speakers Corner’, which is a small area that is dedicated to the freedom of speech. Traditionally people would get up on a box and air their views to the world, which is where the expression ‘getting on your ‘soapbox’ comes from. You can say literally anything and air your views on a variety of subjects. If it is legal, you can rant about it.

Hyde Park is also well known for its concerts and entertainment and it is one of the premier locations for the big name performers who love to perform in London, despite all of this it remains one of the most unspoiled and charming English country gardens. A haven for Londoners and a tourist destination of note.