On Saying Goodbye to Summer 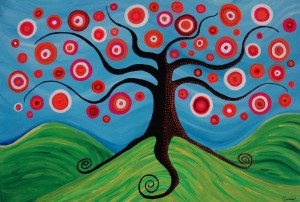 Sweet Summer has popped her head back into London to grin a sunny, “Hello!” before she will bestow a gracious curtsey and exit behind velvet curtains so Elegant Autumn may assume her reign on stage.  It’s that in-between phase when we second-guess the necessity of grabbing that jacket hanging at the door or if the long sleeves we’re already wearing might be a bit much.  It’s that time of dowsing ourselves in the silky warmth of a cappuccino or cocoa while still basking in the pleasant cool of our sidewalk seating.  It’s yielding to the temptation of summer clearances punctuated in shop windows, wishfully thinking that your purchase could still make a sassy appearance before lying dormant in storage, yet feeling just as eager to nuzzle into that merino wool sweater you just unpacked.  It’s renting a carand driving to the countryside, whirring past pumpkin fields along the way and slowing down for the odd pig or hen to cross the road, pitching your tent and revelling in the autumn possibilities for the landscape yet relieved to know the summer-weight sleeping bag will suffice, the camp fire merely for aesthetics.  It’s watching the greens of the trees deepen before releasing their golden pigmentation; it’s going for a run with a thermal 2nd layer on top but with shorts still on the bottom.  It’s letting your skin breath until it voluntarily seeks cover in view of a sun that sets increasingly earlier with each evening.  It’s saying goodbye to Summer, yes, as we move further from its solstice,  but it’s all the anticipatory mystery that comes with greeting an impending equinox.  It’s a swirling shift in colours, a new depth in hues painting how we perceive our world, and London is a-buzz with it.