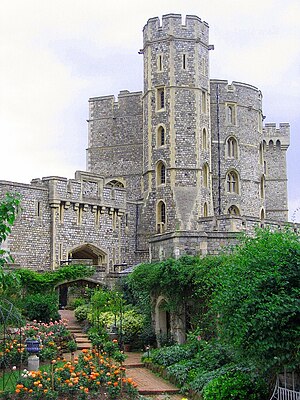 Having moved to London from the US three years ago, I’ve had the pleasure of visiting not just one Windsor Castle in the UK, but two. And just within about a week’s time recently, I’ve revisited both!

The first Windsor Castle is, well, the real one. Situated just outside London’s urban sprawl in the town of Windsor, of course, Windsor Castle is one of the royal palaces still in operation. Just like the royal standard flying atop Buckingham Palace is an indication that the Queen is in residence here in the city, so it will fly above Windsor Castle when she’s occupying her quarters there. This wing is not accessible by the public, although much else of the castle is should you decide to visit after your London move—I encourage you to! The St. George’s Chapel on site there is the resting place of many influential British monarchs, including the present Queen’s parents, King George and the Queen Mum, and you can wander through the grand opulence of the castle’s corridors and rooms to glimpse history as portrayed by sculptures, portraits, and crests. There is an admission fee, but if you request the applicable form, you can obtain a stamp at customer service that entitles you to return again for free within the course of twelve months.

Windsor Castle is located right at the border of Windsor and Eton, which you’re likely familiar with as the home of Eton College, where Princes William and Harry studied and which has been an elite educational institution for boys for six centuries. If dining in the vicinity, make sure to treat yourself to the traditional dessert “Eton Mess” – it’s not as messy as it sounds and is utterly deelish! 🙂 To get to Windsor by train from central London, take the overground train from Paddington Station to Slough (which is none other than the fictional location of the UK’s original The Office series, *hee*). It’s about a twenty-minute ride and, from there, you can catch the express train to Windsor that takes only a few minutes.

My more local Windsor Castle, however, is a pub tucked away in the quieter streets of Notting Hill that the tourists usually neglect on their pilgrimage to Portobello Road. A popular neighborhood for American and Canadian expats in London, Notting Hill is home to several pubs along the beaten path, but Windsor Castle is a peaceful haven that makes you feel like you’ve really stumbled on a nice secret. Be prepared to mind your head as you walk through the tiny doors of once-private areas of pub seating, and, if it’s a nice day and you’re not in the mood for the cozy darkness of its wooden interior, try to grab a seat outside in its charming beergarden, where you can sip your traditional ale or wine under the protecting shade of trees.

When you relocate to London, you’ll readily find there’s no end to the high-profile tourist attractions and low-key local haunts alike, so the best part of living here is trying to hit them all!