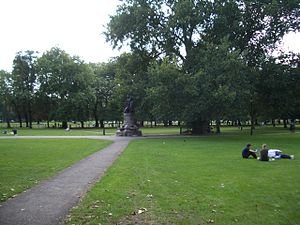 If you’re going to be moving to London, you’re first choice is going to be where you find your perfect rental. Choosing whether you’re a Northerner or from Sarf London is the first step.

Sarf London, as it is known to the locals, is a wonderful place to live. Not traditionally the haunt of Americans moving here, the high prices of accommodation have had many expats looking further afield for a home while they are living in London. The biggest drawback to living in south has to be the transport system. Despite massive improvements during the last year, there are still fewer tube stations than north. You’ll have to familiarize yourself with the bus routes and overground train system if you are going to be living in South.

People often make the assumption that South  is somewhat shabbier and poorer that the North. This could not be further from the truth. Neighborhood’s like Wimbledon and Clapham have become premium addresses in South. You’ll still have to hunt around, if you’re on a budget, but South has some real potential and opportunity, especially if you’re going to be buying a home.

South has some of the biggest parks and open spaces, and while they are not as popular as the central Royal Parks, areas like Clapham Common are huge and within walking distance of many suburbs in South. South is also the prefect launching point for travel into England. You don’t have to battle the traffic to get out of  town when you’re south of the river. You’re less than an hour away from the countryside and the seaside when you live in South and travel by car is a definite possibility when you choose South as a home while you are living here.

It’s all about what your needs are!  Do you have a family? Will you need schools? South has a more community oriented atmosphere and some of the best schools and family amenities. Just remember that wherever you choose to live here, the entire city is your playground. Now get out and enjoy it!