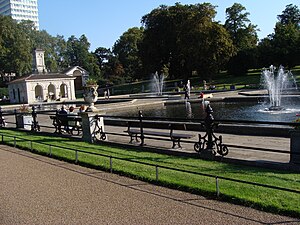 Beginning your ‘living in London’ adventure at the start of summer means that you’re in for a right royal treat. London puts on her best every summer for the thousands upon thousands of tourists that visit England’s green and pleasant time every year. Of course, just as soon as you have settled into your new London rental, you’re no longer considered a tourist! You’re one of us now, and summer is the best time to get out and explore your new city. This week we’re spending some time giving you the Londoner’s guide to where to go and what to do during the halcyon days of summer in London.

Just because it’s summer you should still be prepared for any type of weather while you’re out discovering what your new home has to offer. In recent years the month of September has been warmer than July and August, but for the most part you can expect extremely hot days, or cold and rainy days, or the occasional shower, or not. That is about the most predictable one can be about the weather in England!

If you haven’t seen our previous posts about living in London and the weather, this is your most important tip: Never complain about the weather to a native Londoner. As a foreigner, you’re just not allowed to! That said, be prepared for a lot of moaning about the weather from the English themselves.

The best thing about living here during in the summer is that you will be able to get out and discover the parks and green spaces within the city. London has some of the best parks in the world and is one of the greenest cities in the world. If you’re new here and want to get out for the day then the most famous parks are Hyde Park and the adjacent Kensington Gardens. It’s one of the best starting points of a city tour and you’ll feel right at home among the tourists and locals alike.