Living in London: Spending on the Silver Screen 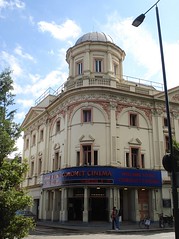 When’s the last time you payed $60 just to see a movie with your sweetie? Well, that’s how much you might expect to pay when you relocate to London. Belinda mentioned in her Tuesday post, “Living in London: ‘I’m an Englishman in New York’” that we expats moving from countries with currencies weaker than the British pound should immediately drop the habit of converting after moving to London. It’s a mental torture that is not necessary if you’re working in the United Kingdom and earning your wages in GBP—at that point, it all becomes relative.

Nonetheless, we had fun shocking our family and friends with our most recent movie bill when we were home for the holidays, as though it’s some parlor trick to play, “Convert the GBP to USD!” In our case, we were seeing the latest Harry Potter soon after it came out, so we were concerned about getting decent seats. So we paid an extra £ or two apiece to attain “VIP” tickets that allowed us to reserve specific seats. That plus the online booking plus the original cost of two adult tickets during what was admittedly a prime time offering no discount, our ability to enter that theatre and watch the film cost close to £25 pounds. We then somehow managed to spend nearly £15 on refreshments—simply a medium popcorn, large water bottle, and my requisite Peanut M&Ms. So, on doing the math, that would bring our grand USD total to roughly $60. And my husband ended up not caring much for the movie.

‘Tis why, then, we don’t go out to the cinema very often, but there are certainly ways to save on doing so. If your schedule is flexible, you can obviously  obtain discounted rates on non-peak times, like weekday matinees. And some movie theatres in London might offer membership rates. Cineworld, for example, which has theatre complexes in multiple areas around London, offers a card with which you can view unlimited movies for only £13.50 per month (exceptions, of course, apply, so read the fine print).

Yet sometimes you just might be willing to pay a premium. London Relocation‘s stomping grounds—the Notting Hill neighborhood of London—for example, is also home to three of the prettiest, most historic picture houses to be found. The Coronet and  Gate Cinemas are neighbors right on Notting Hill Gate road, mere footsteps from the tube station, and Electric Cinema is nearby on the famous Portobello Road. These single-screen beauties may only offer one or two movie options and with limited viewing times, so you’ll want to book in advance. The Coronet offers £3.50 Tuesdays, which is pretty cool, and even its other two counterparts might cost slightly more at peak times, they offer spacious seating  with 2-person “loveseat” options and tables for food and drink (including alcohol). The Electric in particular has leather chairs with foot rests, so, along with the interiors of vintage opulence all three theatres share, going to one of these is really about the total experience, not just the movie.

And then there’s the option of just renting a flick on-demand and kicking your feet up within the greater comforts of your London apartment. 🙂