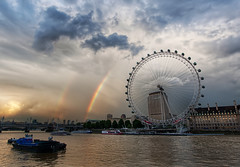 Over two years after relocating to London from Chicago, I’d say I’m getting touring visitors down to a science, if not an art. Hence, the inspiration behind my London Bundles series a while back. It’s a wonder how you can get to know your new city without even trying, really…a place like London honestly has points of interest around every corner that you stumble upon just going about your everyday.

My sister has been in town since last Tuesday, luckily having had the foresight to bump her flight from Chicago to a day earlier to miss the snowstorm that otherwise cancelled her original departure. We lied relatively low the first couple days, just hangin’ round my neighborhood, but Thursday we hit the City for the requisite big sights: Big Ben, Westminster Abbey, the London Eye, Trafalgar Square, and the Tower of London, with a snack at the Hung, Drawn, & Quartered pub before heading home to entertain girlfriends at my ’80s-themed fancy dress shindig. Friday brought us to Notting Hill, which naturally included the shops along Portobello Road as well as a jaunt down Westbourne Grove to check out its posh boutiques and London Relocation’s new office! We then closed out the night at the Sun in Splendour and Churchill Arms pubs.

Rolling into the weekend (and nursing a hangover), we made our way to High Street Kensington and beyond to Kensington Gardens, taking in Kensington Palace (under extensive refurbishment, but still open to visitors with its Enchanted Palace exhibit) and its Round Pond. Revived in the fresh air and mild temps despite a grey sky and uncharacteristic wind, we walked the length of the park to discover James Barrie’s enchanting Peter Pan statue at its heart (which the author had erected during the night so children could be delightedly surprised with it by day) and follow the Serpentine to its end in Hyde Park. Crossing over to exit out by Marble Arch, we rejoined the population and pavement with a wander down Oxford Street until we met its kindred spirit Regent Street. Opting to veer off the well-beaten path of these large streets, we ducked over to the Liberty store for aesthetics and into the labyrinth of Carnaby Street for dinner. Sunday then delivered another classic London package of sites in proximity as we started out at a morning service at St. Paul’s Cathedral, strolled to Postman’s Park and Smithfield, then down Fleet Street for pub ales and fare at Ye Olde Cheschire Cheese and the George before diverting to Covent Garden and ultimately tubing it to Edgware Road for dinner and sharing mint tea and a cherry shisha for dessert 🙂 .

Ahh…which leads to today. The Piccadilly Line to Kings Cross delivered us to a quite disappointing temporary display of Harry Potter’s Platform 9 3/4 before we ventured to the very nearby British Library to peruse its amazing manuscript room. A southward jaunt took us to the Charles Dickens Museum at the home where he wrote Oliver Twist and Nicholas Nickleby before we sprinted to the British Museum for at least an hour of enjoying its artifacts. A few stops up the Northern Line to Camden Town, and we were in London’s alternative haven of markets and music, and we paid homage to the great British bands that got their start in this London neighborhood by taking in a nightcap at Dublin Castle.

So. We. Are. Pooped. Yet accessory shopping and tucking into an English Breakfast are still on the agenda for tomorrow before my dear sister departs my apartment and returns home to Chicago’s deep freeze. *sigh* I’ve waited over two years since moving to London for her to visit, and it’s been well worth the wait…if only it seemed to last longer than a blink 🙁 .