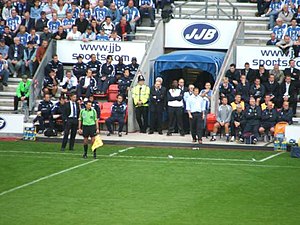 One of the most exciting aspects of living in London is the atmosphere that rolls around at the beginning of another season of the English Football Premier League. With the start of the new season around the corner in August, if you haven’t chosen a team yet, then you’d better do so soon or you’ll miss out on the fun. The Premier League can be very entertaining if watched without any personal interest. But if you’re supporting a team, casual entertainment turns into you watching your team and hanging on the edge of your seat, cheering when they score and screaming at them when they’re on the wrong side of the score line. Basically, it becomes absolutely thrilling.

Here then, a few teams to look at should you still be in need of a football club to offer your allegiance to. These are just suggestions. If you find another team that takes your fancy, go ahead and offer your loyalty. Team tattoos are optional!

Now if you’re new to this Premier League football thing, the general rule is that there are three main clubs in the league; Arsenal, Liverpool, and Manchester United (though Chelsea and Manchester City can now count themselves in the bunch, too). It’s easy enough to offer your support to United given that they are the most popular football team in the world, hands down. But there’s very little fun to be had supporting a team with so little doubt over whether they’ll win or lose. It’s more exciting to watch your team play being more uncertain of the outcome. In that case then, you might want to try supporting Arsenal as no one, including their manager seems very certain of when they’ll win anything (just kidding Gunners fans!). Then there’s Liverpool, another team who flip flop from brilliant displays to flat performances, but with some heavy changes at the club (including the return of the legendary Kenny Dalglish) things may be looking up for the club.

Those are just a few examples, but if you’re living in London, you’ll soon come across a few more teams that might be worthy of your support. Choosing a team may be the opening to meeting loads of new friends and on a Saturday afternoon; wearing a new team wardrobe!