Living In London – Piccadilly Circus. The Big Top in London? 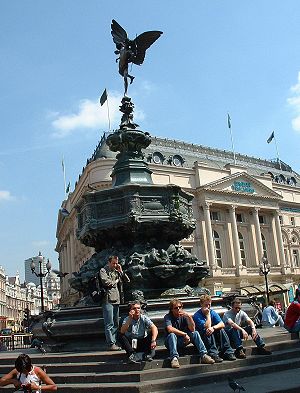 You are well settled into your new rental and you have done the biggest and most famous tourist attractions as part of your initiation and integration into London. You keep hearing about Piccadilly Circus, and may be wondering if there is a permanent circus in the heart of London. It seems to be an English thing. Words are not what they seem, they may have more than one meaning, and Piccadilly Circus is not in fact a Barnum and Bailey spectacular.

Piccadilly Circus can be most likened to Times Square in New York. It is a busy road intersection in the heart of the West End of London as well as a large public space with a famous statue. It used to be surrounded with neon signs to light up the night and give the area a sense of color and glamour. Although many of the neon billboards have been taken down to preserve the buildings, the north side of Piccadilly Circus is still lit up. The word Circus comes from an old Latin word, meaning a circular area set aside for public entertainment, and Piccadilly delivers on this all year round.

It is in the heart of the West End, which means theatreland. The London Pavilion and the Criterion Theatre are right on Piccadilly Circus and it has a direct transport link to the bright lights of Shaftesbury Avenue, and Haymarket ending up at Leicester Square. It is so popular; a hub of London nightlife, the phrase Piccadilly Circus has been adopted into the English language to describe a place as being extremely busy. The area is surrounded with shops, and restaurants and hotels. If you’re heading out for the night, then Piccadilly is a great starting point.

In the middle of all of this bustle and business is the statue of Eros, which sometimes seems at odds with the modern signs and entertainment. A little oasis of calm, and a local icon. The statue of Eros, which is also referred to as “the Angel of Christian Charity” and it caused something of a controversy being the first statue of its time to have a nude figure.  Living here means that you’ll be swept into the maelstrom of London life and have the chance to experience everything. When you head into Piccadilly, take a moment to enjoy the surroundings and the history before joining the throngs of people for a good night out.