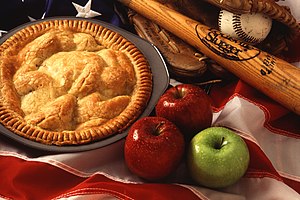 In pondering my blog post yesterday about getting adjusted to some differences when you move to London, while its primary focus was the logistical differences rather than cultural ones (a move abroad, after all, should embrace those sorts of differences!), it is nevertheless a fact that many American expats crave what they knew from home at least every now and then. It’s not intended to be ethnocentric or closed-minded, it’s simply a matter of what you know and sometimes not realizing until it’s gone how much you miss it. This does not just happen to Americans, but indeed anyone who relocates internationally and has to assimilate to new everyday ways of living. Why do I keep referencing Americans then? Well, because I’m American. And I work for an American-owned and operated business. And most of our clients are American. It’s not a demographic I should only focus on, but is a quite relevant one, so below is a summary of locations where we Yankees can get our fix of Uncle Sam. London Neighborhoods This advice could direct you toward the whereabouts of your future London apartment in one of two ways: tell you where you want to live or indicate where you don’t. It depends on if you’re relocating to London and hoping to avoid fellow Americans like the plague or, conversely, seeking to immerse yourself in this familiar community. We’ve blogged about it numerous times before (see our “London Neighborhoods” category for related posts), but, overall, Americans moving to London tend to gravitate toward Notting Hill, Kensington, South Kensington, Chelsea, St. John’s Wood, and Islington. With the exception of the latter, west London in general reigns as providing an aesthetic and convenience that the Yankees dig. These neighborhoods are central, close to Heathrow Airport, gentrified, and relatively family friendly—though if you’re looking to optimize this last item on the list, Highgate and Hampstead are nice choices for more interior and village-y green space, though will come at a price for such. London Stores For groceries, I can recommend Partridges, the USA Food Store, and Whole Foods for a healthy dose of familiar foods (the first two will for sure have quintessential products like Jif peanut butter, Kraft Mac-n-Cheese, Bisquick pancake mix, and even Teddy Grahams, for cripes sake, and the third serves up a fine Thanksgiving meal). For clothing, while I don’t know why you wouldn’t want to dive headfirst into the fabulous fashionista offerings of local stores, you can still find familiar retail chains that are popular in the States like the Gap, Banana Republic, Urban Outfitters, Anthropologie, and Hollister.  J Crew and Abercrombie, on the other hand, are no-shows as far as I can tell. Join us tomorrow for a continuation on this brief look at where we can find the US in the UK!