Dating Considerations when Moving to London from America 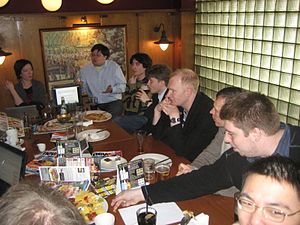 The fear of being alone keeps many singles from moving to London from America.  For those not entwined in a relationship the fear of being alone should be the farthest thing from your mind when given the opportunity to move overseas.  London is a vibrant city full of singles of every age.  Rather than stay paralyzed by fear, those moving to London from America should take the opportunity to expand their social circle and try dating someone new.

When meeting someone in a new country certain expectations have to be accepted as well as others thrown out the window.  For starters, chances are the singles one meets in London won’t be able to meet and get to know the friends back home in the States.  If things get serious the new girlfriend or boyfriend might make a trip back to the US for the holidays, but it will never be the same as dating someone back home.

There will be a high likelihood that potential dates will be from a culture unfamiliar to the American expat.  Even if they are British that still comes with a lot of cultural traditions an American does not know.  The same goes for them; they will not know popular American dating traditions.  This can be fun and exciting at first after moving to London from America, but if things progress and the relationship becomes serious there will have to be a long talk about life and family expectations.

Finally, there is the location to consider.  If one meets a nice London boy or girl things will be all fine and good as long as the American stays in London, but if the Visa expires or semester ends and the American is forced back home the relationship will have to be reviewed.  If one meets another expat from another country further issues with location and travel will ensue.