Living in London: Some Posh Nosh 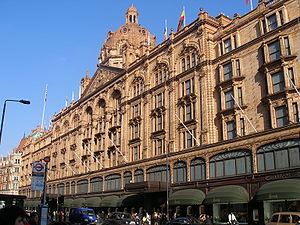 A London move or visit can whisk you away to any number of London neighborhoods, and this week with my friend in town, we decided to navigate the posher side of London.

An errand took us to Fulham Road first, so from there we cut over on Old Church Street (where I read that Kate Middleton lived with her sister Pippa) to get to the King’s Road in Chelsea. My Los Angeles friend was surprised by how much more American she considered that area to be—larger stores and wider sidewalk space perhaps giving that effect, as well as stores popular in the States like Anthropologie and Banana Republic. Walking eastward, we popped into the Chelsea Farmers Market for a cold sorbet—pear with bits of chocolate, their special flavor commemorating the Royal Wedding—because it was a hot as heckfire day in London!

Continuing on past the Partridges store loved by so many American expats living in London because of its American food imports like Kraft Mac-n-Cheese, we soon arrived in Sloane Square where the Peter Jones department store (selling the John Lewis brand) stands prominently aside Tiffany’s and the usual assortment of high street shops. I reminisced about how integral Peter Jones had been when my husband and I first relocated to London and needed to supplement our half-furnished London apartment with this-and-that. Anyway, cutting up Sloane Street, we walked several blocks of what reminded my friend of Rodeo Drive in LA. Passing by Dior, Valentino, Gucci, and the like, we knew that with the increasing opulence of the retailers, buildings, and people the infamous Harrods had to be near. And there it was, glistening in the sun on Knighstbridge with its city-block scale and signature awnings striking an impressive pose.

We spent a long time in there.

Now, to tackle Harrods, you probably should have some sort of game plan if you want to make it out alive. One of my peeves with this store is that they don’t have a full-store directory at the Egyptian escalators, so unless you already know the lay of the land beforehand, you’ll be stuck riding all the way up to see what’s where. It is also difficult to see every department in this gargantuan place, so it helps to refine your interests—we opted for hats and pets. 🙂 The millinery section is gorgeous in all its colorful, feathered whimsy, especially fun after seeing all the hats on display at the Royal Wedding. (Less fun are Harrod’s prices, so unless you really are willing to spend £2,000 on a hat, you might consider a less expensive “fascinator” at Accessorize) And yes, you did hear me say “pets”—Harrods has its own pet shop, along with an entire department of accessories for your diva doggies and couture kitties. And as a timely FYI, an extensive Harrods gift shop has now opened where you can buy assorted souvenirs bearing the store’s logo, and the ground-level perfumery is currently promoting the latest Hermes fragrance, Un Jardin sur le Toit, which is exclusive to Harrods for a few weeks.

And then there was the food. Harrods surely has the most upscale food court you could find—don’t hesitate to plop yourself on a stool at one of its food bars as we certainly did. Our choice was the jamon iberico station, where they had a delightful special of thin ham slices on bread with a glass of Spanish sherry for only £8. My friend ordered that, while I had the carmelized onions and Manchego cheese on flatbread—exquisite! The staff there was incredibly hospitable as well, and it was from the master carver that we learned how this year, for the first time in several, jamon iberico will be imported to the United States from Spain again. Originally facing an embargo due its curing process not being compatible with US standards, there are now US-certified suppliers who are allowed to send this meat over—the pork shoulder has already made its way back across the pond since it only takes one year or so to be cured, but the jamon (the hind leg) requires three years, so this year is the soonest the certified meat can make it over. American chefs must be thrilled, and my foodie friend was psyched to get to taste it here in London first!

As our reward for such hard work strolling around and window-shopping (how do we get through it…), we rounded the bend of Hyde Park Corner from Knightsbridge to treat ourselves to some classic and phenomenally mixed martinis at London’s renowned luxury hotel, The Dorchester, which is celebrating its 80th year. The martinis start at £16, but they’re worth sacrificing dinner for. 😉 Aside from that price-tag, this all amounted to an inexpensive day in London’s ritziest district, so even if you can’t afford to live there after your London move, you can still experience it in style.