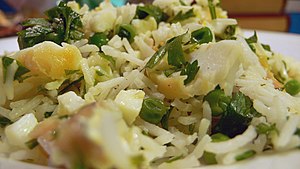 If you’re moving to London you’re going to have to sample some of Britain’s favorite food. No matter if you are an American or Canadian moving to London, the food is much different across the pond.  While curry is not a British invention, it is a British tradition and has become the favorite dish across the United Kingdom. Indian cuisine has taken Britain by storm and you’ll find many Indian restaurants and takeaway venues that serve fine Indian cuisine while you’re living in London.

The history of the popularity of Indian food in England, can be traced back to the time of the British Empire in India. The military that were stationed in India developed a taste and a love for the spicy Indian cuisine and brought the recipes and flavors back to England when they were on leave or going home moving here.

Mulligatawny soup which is considered to be a British institution had its roots in the spicy broths found in India, and Kedgeree which is a firm favorite for breakfast began as a spicy rice and lentil dish in India. The numerous restaurants that sprung up lately had much to do with the introduction of going out for a quick meal. Eating out has not always been popular apart from the upper classes who dined at restaurants and fine hotels. The middle classes took to Indian food and Indian restaurants whole heartedly and the curry in all its forms is now considered Britain’s national dish.

Indian cooking and cuisine has become a part of British culture and tradition and you have to try this type of cooking when you’re living here. It doesn’t matter what part of the city you live in, you just need to walk out of your new rental and head in any direction to find fantastic Indian restaurants and eateries. The east end of London in particular has a number of excellent Indian restaurants as there is a huge population of Bangladeshi’s living in the area, but you’ll find excellent restaurants all over town.

The best way to gauge the popularity and authenticity of an Indian restaurant is to see how many people of Indian origin are eating there. You can eat cuisine from a different country every night of the week while you’re living in London, but you can’t call yourself a true local until you’ve sampled a good curry!