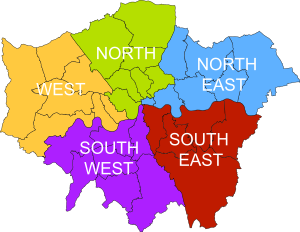 Even if you’re moving to the UK from a big city, the cost of rentals might still give you a bit of sticker shock.

THE COST OF LONDON RENTALS

According to the Mercer report, the average monthly price of London rentals as of this year is £2,800 (or approximately $4,500 in USD). That’s based on a 2-bed, unfurnished luxury apartment, mind you, so naturally what you’ll end up actually paying will depend on a number of factors.

Number of bedrooms, bathrooms, type of building, age of building, extent of refurbishment, which floor the flat is on, which neighborhood it’s located in, the immediately surrounding environment/amenities, etc., of course, can all dictate which London rentals will come at a premium, and we tenants are all at the mercy of those ever-powerful lettings agents and landlords.

I’ll get to those usual suspects in a moment, but first, here’s a couple online references for gauging rent prices in a given postcode/neighborhood:

The Property Watch site above offers both list and map views of average prices:

Generally, prices on southeast rentals aren’t rising at the fast rate of other neighborhoods, and they’re perhaps lowest in the northeast, where rents have actually dropped the last few years.

THE LORDS OF RENTALS

I’m continually moaning on this topic, but, seriously, this city really puts the “lord” in “landlord.” Hugely enabled by the rentals industry, landlords here can be tough to contend with. They’re the ones who compensate the lettings agents, so when you search for apartments directly through such agencies, you have to bear in mind who they’re really working for.

And these landlords are feeling pretty good about themselves. Property Wire reported last month that landlords UK-wide, in fact, are feeling very confident about the buy-to-let market thanks to strength in tenant demand. With decent purchase prices out there as well, nearly half of landlords believe this is a good time to increase their property portfolios rather than reduce them (which less than 1% are keen to do right now). And with tenant demand expected to keep increasing over the next year, about 40% of UK landlords expect to increase their rents by an average of 4.5%.

It’s Econ 101 that if demand for properties exceeds the supply of them, prices will be driven up. Growth in available supply has been overall subdued in the UK, and adequate financing continues to be an obstacle for more private investors to purchase properties and thereby increase that supply. According to the Savills estate agency, private rentals in the UK surged by 50% from 2006 to 2011, and they expect another 23% of growth going forward that requires a couple hundred billion pounds in investment. Property website Rightmove estimates an average yield of 6% on UK rental properties (over 8% in London’s central Westminster and Kensington & Chelsea boroughs), yet, again, despite additional government funding issued for buy-to-let loans and first-time-buyer mortgages, a lot of tenants—particularly in London—are still too squeezed by high rents to seize such opportunity.

With the so-called “Olympics Effect” so highly anticipated in recent years, thousands of new east rentals will certainly become available; what remains to be seen, however, is whether demand for those particular properties will really deliver. Post-Games homes near Olympic Park have already seen decline in value. Central London, in contrast, is seeing a shortage in prime properties and growing demand, which has driven prices up. Over 60% of housing purchases in central in the first four months of this year were made by overseas investors in particular, which, in combination with lower supply, certainly does give the rentals and sales market its own dynamic separate from the rest of the UK.

Approximately 30% of renters are paying over half their income in rent, estimates Rightmove. And HomeLet (a tenant referencing service) reports that average rent in the capital and surrounding southeast region of England has increased almost 6% in the last year, as compared to an average of 2% in UK locations outside the London area.

So, it’s certainly another bumper year for landlords at the tenant’s expense, and not helping is that a fourth of England’s renters feel they’ve owed unfair amounts to lettings agents, too. There’s nothing regulating what administrative fees one estate agency or another will charge tenants on top of the commissions they receive from landlords, so this can cost renters hundreds more.

That’s why I’ve said it before, and I’ll say it again: London Relocation is your protection against an unregulated and often unethical rentals industry. We have to collaborate with lettings agents and landlords, of course, but we don’t work for them nor out of any other motivation than helping you find the best place for you at the best price. We also take on those extra admin fees, so they aren’t passed on to you.

With expats continually moving over to work here, no question the rentals market will remain strong and expensive, but at least the cultural experience to be gained here knows no price.