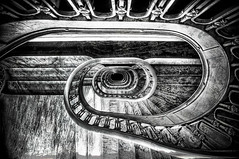 In a recent post, I mentioned how the rent and size of London apartments can throw expats moving to London for a loop. Americans in particular are used to their wide-open spaces, especially those living in the suburbs who’ll likewise find city prices a rude awakening.

London is a modern city like New York and San Francisco and thereby shares the demand and consequent high cost of living of such cities. Contrary to what my other post might have implied, it’s not all Charles Dickens and Shakespeare here; we’re not all working in quaint Tudor-style buildings and living under thatched roofing. London has its shiny skyscrapers (the Shard is the latest one piercing the clouds and adding a new dynamic to London’s southeast skyline), and the development of modern apartments is growing, particularly on the east end (e.g., Canary Wharf, the Docklands, and around Olympic Park) or in the southwest around Battersea Park. Nonetheless, for as contemporary and with-it as London is as a world-class city, its abundance of Victorian London apartments still confronts expats with Ye Olde-School concessions.

Who needs to use the stair-stepper at the gym when you live in historic apartments? With the exception of accommodations for the disabled, stairs are going to be part of your daily reality. Tube stations have ’em, museums have ’em, and those cute red double-decker buses obviously have ’em. The apartments you view (and eventually rent) might be no different. The elevator (or “lift,” in British English) does not make an appearance in many buildings simply because they were constructed before the dawn of such an invention. There are indeed some older buildings, though, that might have had wee lifts built inside them after the fact, but because they had to be retroactively fitted into an existing (thus tighter) space, those can usually only hold a couple people—definitely not your furniture or moving boxes when you’re moving in and out. Regardless, aside from those exceptions, for the most part, you’ve gotta step to it if you want to get home. At least the movers are used to it. They don’t love it, but they know to expect it.

The Perqs of Upper-Story London Apartments

After searching for apartments, I myself moved into one on the second floor (third-floor equivalent in the States) of a 150-year-old terraced house and will confess that I huffed and puffed at the start. Hauling luggage up and down for travels is certainly no treat either. BUT it’s great exercise, and I’ve come to not notice the exertion any more. It’s kept me strong, and I adore our view, eye-level with treetops, a historic church steeple, and classic mansard rooftops atop other apartments on which I expect to see Dick Van Dyke twirl about with his fellow chimneysweeps. And while it may sound silly, one of my daily treats is enjoying the beauty of my building’s wooden period banister all the way up. A gal of aesthetics, I’m easy to please.

As much as I don’t mind (indeed prefer) being on a higher floor now, it’s worth mentioning that there’s admittedly a misconception out there that upper-storey apartments are safer than garden or ground-floor flats. Where burglary is concerned, all London apartments are at equal risk, so I can’t use that argument. But I will say that I feel better knowing not just any schmo walking along the sidewalk can look into our windows or vandalize them. The height also puts us above the sound of traffic, so, while not entirely diminished, the noise pollution is relatively muffled.

When it comes down to it, unless you have a disability warranting it, please don’t close your mind to all the lovely apartments to be had on upper floors JUST because there’s no elevator. Seriously. It’s a tendency for us Americans to waltz over here expecting the thrill of something new and different and yet expecting all our old conveniences (hey, I’m a Yankee, too, so don’t be too offended!), but as I say time and again in this blog, this is the stuff that’s petty relative to what a local lifestyle truly has to offer.

The London Relocation agency often receives enquiries by fit and able clientele listing first or second floors (which are actually called ground and first floors in Europe, respectively) as mandatory criteria for apartments. Your wishes are certainly your Relocation agent’s command, and they always do their utmost to compile apartments ticking all the boxes you specify. However, you could be missing out on some great spaces and views; these upper apartments literally stand above the rest and are worth at least checking out.