Living in London – Negotiating the Tube 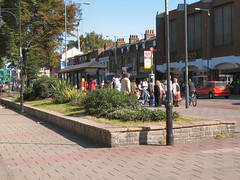 Although London looks quaint and charming on a picture postcard, it is one of the biggest cities in the world and it has share of ‘big-city’ attributes that will keep you on your toes. For the most part, you will find that people will try to live slightly outside of London and your rental apartment here will be in a more suburban setting, which means you might face a commute every day to get into the city for work. No one who lives here will recommend that you get a car to make your way through the city streets during rush hour, and most Londoners prefer to use the extremely efficient rapid transit system that is known as the ‘Tube’. The Tube is like the subway system in America and is a network of underground trains that will take you right into the heart of the city.

The London Underground system was developed to provide a mode of rapid transport as an alternative to overland transport. London was the first city in the first city in the world to develop an underground railway system and the first section opened in 1863. Today, it everyone uses it as one of the cheapest, fastest and safest ways to get around. From daily commuters to travelling tourists, the ‘Tube’ as it has become known, is the foundation for getting around London. Serving over 270 stations, you will always be able to find one that is a short stop from where you want to be. It is managed and run Transport for London. TfL is an umbrella company that makes sure transport is relatively inexpensive and efficient. The tubes do not operate 24 hours a day, due to maintenance and cleaning, but the earliest tubes run from about 4.45am and the latest until about 1am.

London is split into six travel zones, in a roughly circular layout, Zones 1 and 2 being in central London and Zone 6 serving the outer edges of the city. ‘TfL’ produces free maps to help you navigate the tube system and you can get one at any Station. It’s an easy to read and useful map that shows the direction of the tube (north, south, east or west) and the interchanges. Try to avoid travelling at rush hour if you can and always stand on the right when using the escalators. Even though they overtake on the left hand side here, if you are not walking up or down the escalator, you will see signs asking you to stay on the right. The best way to get around transport is to purchase a Travel Card and/or an Oyster Card. It is a pre-paid electronic smart card that you can load with an amount of money of your choice which means that your transport is pre-paid, interchangeable with most modes (buses, trams, tubes and nearly all National Rail Trains) and great value for money.

Living here means that you have to get to grips with the underground. Give it a week or two and you’ll be a seasoned commuter, newspaper and brolly (umbrella) waiting for the morning train.