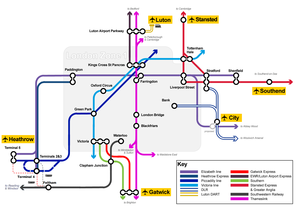 Once you have moved into your cosy new apartment, you be able to entertain your relatives from home with the grand tour. Depending on which airport they are arriving at, it can be a challenge to get from the airport to central London. This guide to airports makes it easy to get to and from any London airport – just another piece of information that makes moving here an enjoyable and worthwhile experience.

Smaller than Heathrow, London Gatwick (LGW) is the second largest airport in the UK and handles a lot of traffic especially from Europe and the Middle East. It is about 45kms from the city and has two terminals linked by a new inter-terminal shuttle in a 3-minute journey. Like Heathrow, the quickest way to get into central London is the Gatwick Express, with trains running every 15 minutes between the South Terminal and Victoria Station in central London. The non-stop journey time is only 30 minutes and a single fare is £16.90. Other rail links to Gatwick are through Southern Railway with two trains every hour between Gatwick and London Bridge and the Thameslink, which also includes stops at St. Pancras and Blackfriars. The journey is under an hour and tickets for both of these services are less than £10.

National Express and easyBus run frequently between the airport and the city center to either Victoria Coach Station or Earls Court with a variety of convenient stops on the way with the National Express. The easyBus service runs 24 hours a day and fares start from £2. If you decide to take a cab to the city then only use the black cabs or official mini-cab companies. Checker Cabs is the official company that Gatwick recommends for their taxi transport to and from the city of London

Luton is about 50 km north-west of the city center and has a reputation of being an easy to use and hassle free airport for those travellers who are looking for budget air travel. It handles over 9 million visitors a year. Getting to and from London Luton airport is convenient and remarkably well priced.

By train, you can travel from Luton Airport Parkway (there are regular shuttles to the airport) into central London on First Capital Connect to St. Pancras and Blackfriars. The trains run 24 hours a day and a single ticket costs £11.90. East Midlands Trains also run a service to and from central London. Both services will have you in the heart of town in less than half an hour.

If you want a budget deal then travel by bus to and from Luton Airport. You can use easyBus for a good value reliable bus service that will get you there in just over an hour. Fares start from £2. You can also take the Green Line 757 coach to or from Victoria Coach Station, with 24/7 buses that run every 15 -20 minutes.

A taxi trip to Luton from central London will set you back at least £90 so it’s advisable to use the myriad of public transport available to get back and forth from the airport and the city.

Britain’s third busiest airport; Stansted Airport (STN) is one of the fastest growing airports in Europe and has made its name by offering great special offer on budget travel to many destinations across the continent. Over 60 km from town, the best way to get there is by the Stansted Express, which is the quickest way to get into the city center. With trains leaving every 15 minutes from 6 am daily, the journey time is 45 minutes and the destination is the busy Liverpool Street Station. A standard single fare is £19 and it is quick and convenient.

If you’re looking for a budget deal then use the easyBus service between Stansted Airport and central. With ticket prices from £2, it’s an easy non-stop journey of just over an hour to get to Baker Street in the city. National Express offers a £10 single ticket on their service between the airport and Victoria Coach Station with buses leaving every hour. The journey is slightly longer though, nearly 2 hours.

If you’re travelling by taxi then only use a black cab, fully licensed mini-cab company or Checker Cabs, which run to and from the airport. Ask you cabbie to tell you the price of the journey before you start, so you are not ripped off.