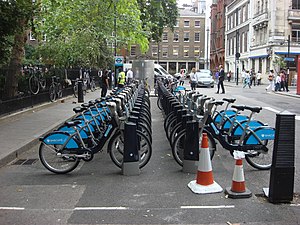 If you’re moving to London, you’ll know all about the importance of the transport network and making your way around this massive city. With the increase in popularity of the exercise and sport of cycling, the Barclays Cycle Hire program was introduced to the city of London in 2010. After you’ve been living and working in London for a while, you’ll get used to the sight of the stunt bike messengers. While you don’t have to leap buildings on your bicycle to get to work, you might find that cycling around London as a commuter, or even just for fun, is a great way to see the city and get some exercise at the same time.

The concept of a public cycle system is already a huge success in other European cities, such as Amsterdam and it is rapidly gaining popularity in London – despite Jeremy Clarkson’s war on cyclists! With over 400 docking stations across the city, you can pick up a bicycle at one station and return it at another. The entire program is self service and the fees are reasonable and if you’re up for the commute every day; you can actually save a great deal of money on your transport costs.

You’ll have to pay two fees to use the service: An User Access fee which ranges from £1 for a day pass or £5 for a week’s use. You’ll also have to pay a Usage fee for the duration of your trip. If you’re only going to use the bicycle for 30 minutes it is free. Up to an hour, you’ll pay £1 and so on. There are some hefty fees for returning the bicycle late or damaging the frame.

The biggest advantage of using the cycle hire scheme  is that there are hundreds of cycle paths and designated lanes for cyclists, making a city commute to work and back very easy. You’ll be whizzing past the gridlocked traffic and you can just smile and think of the thousands of sweaty commuters packed into the underground trains.

Even if you use the cycle hire scheme for a day out on Sunday, it’ll give you the chance to get out of your rental and explore the city from a different angle.